So the weekend has long gone, and it was a good weekend.  Saturday we visited the oldest railway in the world!!!  tanfield railway boasts not only being the oldest railway in the world, but has the oldest surviving railway bridge (although the railway does not cross the bridge anymore).
Just a few short years ago neither of us had any interest in trains.  Now we have 2 small boys, and the eldest thinks they are brilliant, and to be honest we are now all hooked on them.  Old ones mostly, they really do have something special.  So off we went on Saturday to visit Tanfield railway, but we found when we arrived that it was not open.  The railway is to our knowledge run by volunteers, and they run a special Christmas train throughout December, so I imagine that there is a lot of work preparing for that.  Despite the railway not running, a couple of the volunteers told us that one of the rail sheds was open and we could have a look inside.
It was not at all what we expected. we walk in to an engineering room, filled with massive drills, lathes and other various machines.  Through a door was the main part of the shed, with some engines. 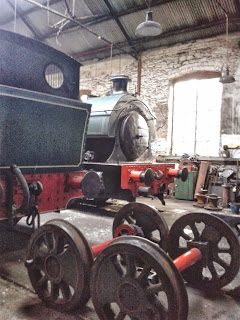 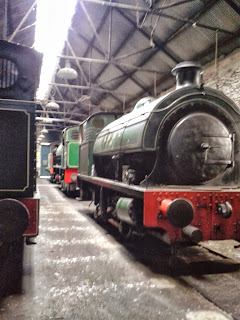 This is not a rail museum like you will find in York or Shildon, this is a working railway.  It looks and feels like you have traveled to the time when these machines ruled the industrialised world.  It was slightly disappointing that the railway was not running, but the site provided a nice little walk, the views of the Tyneside/Durham countryside are lovely and there seemed plenty more to explore and we will be back I'm sure.  The whole visit was totally free, and only if you want to ride the train (on the days it is running) will it cost you anything.


For some time now we have both wanted to try geocaching, but with the little ones it has been a little difficult finding the time and energy at the same time when the weather is good enough to take them out hunting for little boxes.  But Saturday afternoon we decided to go for it. We were out on an errand without the little ones.  With 15 minutes to spare we found 2 local caches that we could try, the first was a tough one which we couldnt find (Morton road, Darlington), but the second we did, and so we became official geocachers.  Its fun, free and addictive, we have both been looking at more cache sites that we would like to visit, but not finding one when you are so close is frustrating.


Sunday brought warm weather, which meant a visit to the beach.  We dont mean sitting sunning ourselves, it was a pirate's adventure.  Lots of going arrggh, with two excitable boys searching for treasure.  We collected some driftwood for Christmas projects, but more about that to come...  Seaham beach has lots of rock pools at low tide to explore, is renowned as a pebbly beach and is sprinkled with the glittering treasure that is sea glass.
Posted by atribecalledwardle at 20:00